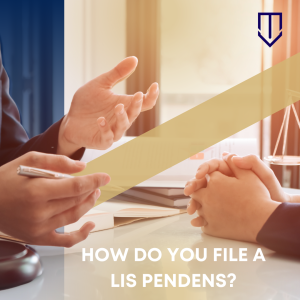 A lis pendens – also called a notice of pendency of action – is a special type of legal document filed with a county recorder. Though its use is limited to lawsuits involving real property claims, its effect is powerful. Once recorded, it acts as “constructive notice” to all persons who would subsequently acquire an interest in the property at issue that a lawsuit is occurring.

In this way, a lis pendens protects title holders as they proceed through litigation and, more importantly, the appeals process. The attorneys at Underwood Law Firm have filed countless lis pendens notices and are more than familiar enough with their requirements to assist you in your real estate litigation.

When can you file a lis pendens?

Because the purpose of a lis pendens is to give constructive notice to any persons subsequently obtaining an interest in the subject property, the lawsuit has to involve a claim related to property. Under the Code of Civil Procedure, a “real property claim” is any cause or causes of action in a pleading which would, “if meritorious, affect… title to, or the right to possession of, specific real property.” (CCP § 405.4.)

For example, “Shawn” and “Julie” are co-owners of a house in Sacramento. Shawn decides that the ownership has become too cumbersome on his finances and decides to file a partition action to force a judicial sale of the home. In this situation, Shawn should file a lis pendens because a partition action affects both the title to and possession of the property.

What is the effect of a valid lis pendens?

As stated earlier, a lis pendens acts as a “notice.” This is important because, generally, someone who is not a party to a lawsuit is not affected by whatever judgments the court renders. The court cannot exercise its jurisdiction to bind someone to its decrees if they are not a party.

A lis pendens is a major exception to this rule. Its purpose is “to furnish a means of notifying all persons of the pendency of an action and thereby to bind any person who may acquire an interest in the property subsequent to the institution of the action.” (Arrow San & Gravel v. Superior Court (1985) 38 Cal.3d 884, 888.)

Therefore, anyone who obtains an interest in the property subsequent to the filing and recording of the lis pendens takes that interest with “constructive knowledge” of the lawsuit occurring and will be bound by its judgment. (Deutsche Bank National Trust Co. v. McGurk (2012) 206 Cal.App.4th 201, 214.)

The effect of the lis pendens is particularly relevant when appeals are involved. Returning to the example of Shawn and Julie, recall that Shawn filed a lis pendens when he filed his lawsuit. During the suit, Shawn prevails, and the court orders the house sold. But Julie files an appeal.

Nonetheless, Shawn continues with attempting to get the house sold. When he finds a buyer, “Jack,” Jack is deemed to have notice of the lis pendens in place because it turned up when he conducted a title search. Months after Jack buys the house from Shawn, Julie wins her appeal, meaning the original court order providing for the sale of the house was invalid.

Because Jack knew of the lis pendens, he is bound by the judgment of the appellate court, and Julie can retain possession of the house.

How do you file a lis pendens?

Filing and recording a lis pendens is subject to its own requirements. The lis pendens takes the form of a notice, which is a type of legal document that must contain the names of all the parties in the lawsuit and a description of the property affected by the action. (CCP § 405.20.)

Once the notice includes this information, it must be signed. But the signing requirements are different depending on whether the party has an attorney. If they have retained a lawyer, then the lawyer may sign the notice. If they are self-represented, then the party must sign the notice themself and get it approved by a judge. (CCP § 405.21.)

After signage, the notice must also be mailed to all the parties and all owners of record for the property. (CCP § 405.22.) Only then can a party “record” the notice in the office of the recorder in the county where the property is located.

Can a lis pendens be denied?

Yes. A savvy litigant can actually move (ask the court) to have a lis pendens expunged.

Both of these determinations can get quickly complicated. For example, contract disputes over a purchase and sale agreement for a house clearly fall within the scope of the statute. Equitable liens and constructive trusts, however, are not as clear-cut, and the appellate courts have issued many conflicting opinions on the matter.

Regardless, a motion to expunge is no light undertaking. The Code of Civil Procedure makes clear that the law requires a court to award attorney’s fees and costs to the party prevailing on the motion. (CCP § 405.38.)

A lis pendens is a small but vital piece of any litigation involving the property. The protection they afford during an appeal is invaluable, especially when a litigant is faced with an unwanted judicial sale. It is, therefore, important to have the right attorney by your side to make sure this crucial legal document is filed the right way.

As each case is unique, property owners would be well-served to seek experienced counsel familiar with lis pendens and the real property claims affected by them. At Underwood Law, our knowledgeable attorneys are here to help. If you are concerned about whether you can file a lis pendens with your lawsuit, wondering if you can expunge a lis pendens yourself, or if you just have questions, please do not hesitate to contact our office.

Go here to get more details.