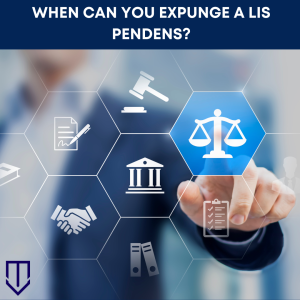 A lis pendens – also called a notice of pendency of action – is a special type of legal document filed with a county recorder. Though its use is limited to lawsuits involving real property claims, its effect is powerful. Once recorded, it acts as “constructive notice” to all persons who would subsequently acquire an interest in the property at issue that a lawsuit is occurring.

This small legal tool, however, can sometimes prove itself to be subtlety abusive. When bad-faith litigants file them, they essentially act as injunctions against encumbrances and sales of property, drastically affecting the rights that property owners should have.

For this reason, litigants have the option to expunge a lis pendens outright, though it is no light undertaking. At Underwood Law Firm, our expert attorneys are more than knowledgeable on expungement motions and their intricacies and are prepared to assist you in your real estate litigation.

What Is a Lis Pendens?

As stated, a lis pendens is a special type of legal document designed to give notice of litigation. But it is limited in scope, applying only to real property claims. Under the Code of Civil Procedure, a “real property claim” is any cause or causes of action in a pleading which would, “if meritorious, affect… title to, or the right to possession of, specific real property.” (CCP § 405.4.)

Once filed, the lis pendens acts as a lien on the property at issue, furnishing “a means of notifying all persons of the pendency of an action and thereby [binding] any person who may acquire an interest in the property subsequent to the institution of the action.” (Arrow Sand & Gravel v. Superior Court (1985) 38 Cal.3d 884, 888.)

In this way, a lis pendens protects title holders as they proceed through litigation and, more importantly, the appeals process. Put another way, a lis pendens acts as a cloud against the property, effectively preventing the sale or encumbrance of the said property until the litigation is resolved or the lis pendens is expunged. (Amalgamated Bank v. Superior Court (2007) 149 Cal.App.4th 1003, 1011.)

What are the Reasons a Court Will Expunge a Lis Pendens?

A lis pendens is reserved for lawsuits that involve real property claims. Sometimes, their application is obvious. Partitions, for example, are lawsuits where the court will divide up a property or force its sale between co-owners. Quiet title actions involve property owners attempting to settle, once and for all, the validity of the title to their property.

While these examples are clear-cut, there are other instances where the applicability of a lis pendens is more questionable. A case in point is the doctrine of constructive trusts – a unique type of legal theory where litigants attempt to argue that they are owed property or proceeds under equitable principles.

Expungement exists for these cases where the claim is not clearly property-related. In these instances, a court shall order a lis pendens expunged only if it determines (1) the pleading on which the lis pendens is based does not assert a real property claim or (2) that the claimant has not established the probable validity of a real property claim. (Shoker v. Superior Court (2022) 81 Cal.App.5th 271, 277.)

When Can You Expunge a Lis Pendens?

When parties try to expunge a lis pendens before the trial court has adjudicated the issues, it usually is because they suspect some foul play. As stated above, lis pendens is incredibly powerful because they essentially restrict a party from selling or encumbering their property in any way. The financial pressures created by a recorded lis pendens provide the opportunity for abuse, permitting parties with meritless cases to use it as a bullying tactic to extract an unfair settlement. (Amalgamated, 149 Cal.App.4th at 1012.)

Thus, parties will try to expunge these notices of lis pendens before trial because they think they are meritless and inapplicable to the current lawsuit.

Post-judgment expungement motions usually come from a different place. There, a court issues a judgment declaring a winner and a loser. If the loser appeals the judgment, then the lis pendens is still active.

Thus, the post-judgment motion arises out of a victorious party seeking to either sell or encumber their property but being prevented from doing so by the existence of the lis pendens. They, therefore, attempt to expunge the lis pendens to move the process along.

How Does the Timing of Expungement Affect the Court’s Decision?

The lis pendens statutes underwent significant changes in 1992 that drastically altered the way courts evaluate expungement motions. Code of Civil Procedure section 405.32 states that courts will expunge lis pendens if the claimant has not established a “probable validity” of the real property claim existing.

As it stands, the “probable validity” wording is vague in its own right but is further complicated by the timing (either pre-judgment or post-judgment) of the expungement motion.

By the legislature’s own admission, the law is manifestly targeted at motions to expunge before trial. The “probable validity” phrase is obviously written from the perspective of a trial judge trying to forecast, at some point before trial, the “probable” outcome in the trial court. (Mix v. Superior Court (2004) 124 Cal.App.4th 987, 995.)

But the standard is actually different when the expungement motion comes after the trial court has already entered judgment and while an appeal is pending. In those cases, the trial court may deny the motion to expunge only if the court believes that its own decision will be reversed on appeal. (Id.)

This seemingly incongruous result leaves many a litigant frustrated and incensed. This lis pendens is supposed to act as an injunction against property sales for the duration of the litigation. Yet, while the case is on appeal, the victorious party can seek to expunge the lis pendens (and almost always succeed), running the risk that the property will be sold and any appellate relief rendered moot.

If you’re facing an expungement motion while your case is on appeal (a process that may take years), you might think all hope is lost. Not so. The right attorney, like those at Underwood Law, knows the law well enough to utilize all available tools, including writs of mandate, to assist in your case.

And as each case is unique, property owners would be well-served to seek experienced counsel familiar with the notice of lis pendens and the real property claims affected by them. At Underwood Law, our knowledgeable attorneys are here to help. If you are concerned about whether you can file a lis pendens with your lawsuit, wondering if you can expunge a lis pendens yourself, or if you just have questions, please do not hesitate to contact our office.