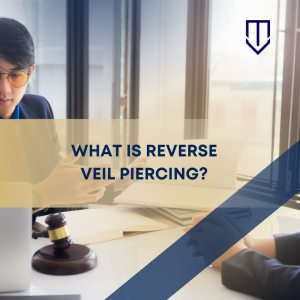 No. In California, individuals often hide behind “corporations” that consist of a single shareholder. In so doing, they protect themselves from liability by utilizing a corporate form. This can be especially frustrating in lawsuits.

Often, a plaintiff will receive a judgment in their favor, only to find the corporation they’ve sued has magically become bankrupt, unable to satisfy their debts. California law provides a remedy for this instance, called “piercing the veil.”

But sometimes, the situation is reversed, and an individual cannot satisfy their debts. In some states, courts allow creditors to reverse pierce the veil and seize the corporate assets owned by the individual shareholder. California does not allow this, as the courts see it as a hasty and inadequate solution for which other remedies already exist.

What is “Piercing the Veil” in Corporate Law?

“Piercing the veil” is a traditional equitable remedy under the laws of California. Its existence is owed, ironically, to the limited liability afforded to shareholders of corporations across the state. The general rule is that a corporation insulates shareholders from liability on claims of creditors.

Thus, if a corporation is sued, the shareholders cannot be held personally liable for the debts of the corporation. This is the norm and the reason that many individuals form corporations or LLCs across the country. “Limited liability is the rule, not the exception.” (Greenspan v. LADT LLC (2010) 191 Cal.App.4th 486, 510.)

That said, there are sometimes situations where a court will “pierce” the veil of the corporation to reach the individual shareholder(s). Usually, courts will employ this method when a creditor (someone who has won a lawsuit or bank seeking its owed loan payments) cannot otherwise collect from the corporation due to abuse on the part of the shareholder to evade individual liability or to accomplish some wrongful purpose using the corporation as a liability shield. (Mesler v. Bragg Management Co. (1985) 39 Cal.3d 290, 300.)

Because piercing the veil is an equitable remedy, however, it is highly fact-dependent and based on the circumstances of each individual case. There are; nonetheless, two general requirements courts employ to invoke the remedy.

First, there must be such a unity of interest and ownership that the separate personalities of the corporation and the individual no longer exist. And second, if the acts are treated as the corporation’s alone, an inequitable (unfair) result will follow. (Automotriz etc. de California v. Resnick (1957) 47 Cal.2d 792, 796.)

What is the Alter Ego Doctrine?

Usually, when the veil is pierced, the corporate entity is disregarded so that the courts may fasten liability on individual stockholders. But in certain situations, the facially liable corporation is “so organized and controlled, and its affairs are so conducted, as to make it a mere instrumentality, agency, conduit, or adjunct, of another corporation.” (Greenspan, 191 Cal.App.4th at 512.)

Put differently, if someone owns 5 companies, and is using them all under the same umbrella for improper purposes, then the court can disregard one to enforce liability on all of them. When this happens, the court has made the determination that though there are two or more personalities, there is but one enterprise; and that enterprise has been so handled that it should respond, as a whole, to the debts of certain component elements of it. (Las Palmas Associates v. Las Palmas Center Associates (1991) 235 Cal.App.3d 1220, 1249.)

In evaluating multiple companies under the alter ego theory, courts will consider a whole host of factors. But key examples are that the companies all share the same assets and fail to separate their funds; whoever controls the companies fails to maintain adequate records for each; and the total absence of corporate assets or capitalization (Zoran Corp. v. Chen (2010) 185 Cal.App.4th 799, 811.)

What is Reverse Veil Piercing?

Reverse veil piercing is a unique concept that some states, like our own, do not recognize. As stated, normal veil piercing occurs when the court decides to hold an individual shareholder liable for the debts of their company.

Reverse piercing is the opposite. There, the court allows a third-party creditor to reach corporate assets to satisfy claims against the individual shareholder. (Postal Instant Press, Inc. v. Kaswa Corp. (2008) 162 Cal.App.4th 1510, 1518.)

For example, suppose “Shawn” defrauds “Julie” of thousands of dollars. Julie sues Shawn and wins in court. She receives the right to collect her judgment, but when she approaches Shawn, he claims that he is penniless. After some digging, Julie learns that after the lawsuit, Shawn transferred all his assets into one of several corporations that Shawn owns as a single shareholder. In states like New York, Julie could reverse pierce to collect her judgment from the corporate assets of Shawn.

Why is Reverse Piercing not allowed in California?

California courts have not often addressed reverse piercing, but when they have, they have found that it is an inadequate substitute for what the alter ego doctrine already provides.

California courts have characterized reversed piercing as addressing situations where the shareholder transfers his personal assets into corporations to shield them from the collection of creditors. This is what occurred with Shawn and Julie above.

But in California, remedies already exist to address these actions. Julie could sue for conversion or fraudulent conveyance, for instance. Thus, because these remedies already exist, “reverse piercing, accomplished by the expedient means of a post-judgment motion, is an unacceptable shortcut to pursue those remedies.” (Postal, 162 Cal.App.4th at 1523.)

Corporate litigation is a lengthy and difficult process, especially when instigated against one-man fronts misappropriating their corporate form. Even when victory is secured in court, securing what one is rightfully owed can be just as, if not more, difficult than the initial lawsuit.

As each case is unique, prospective litigants would be well-served to seek experienced counsel familiar with corporate litigation. At Underwood Law, our knowledgeable attorneys are here to help. If you are concerned about whether you pierce the veil to collect a judgment, wondering how you can collect against an individual, or if you just have questions, please do not hesitate to contact our office.