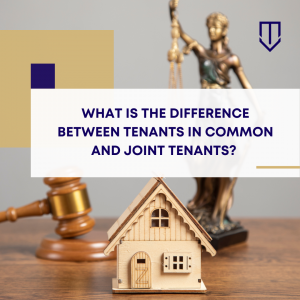 Additionally, if at any point, one of the four unities are destroyed, then the joint tenancy is severed and a tenancy in common results, thereby extinguishing the right of survivorship. (Tenhet, 18 Cal.3d 150,155.)

How is a tenancy-in-common created in real estate?

The creation and maintenance of a tenancy in common are far less stringent than that of a joint tenancy. There is no requirement of four unities; instead, “tenancy in common merely requires, for creation, equal right of possession or unity of possession.” (Wilson v. S.L. Rey (1993) 17 Cal.App.4th 234, 242.) In essence, “all tenants in common have the right to share equally in the possession of the entire property.” (Kapner v. Meadowlark Ranch Assn. (2004) 116 Cal.App.4th 1182, 1189.)

Because the unity of interest is not a prerequisite for a tenancy in common, this means that tenants in common do not need to have the same ownership interests in the property. This is especially important in partition actions, where a cotenant’s fractional share of an ownership interest will determine their disbursement from sale and credits or charges in a final accounting. (see Wallace v. Daley (1990) 220 Cal.App.3d 1028, 1035 [“every partition action includes a final accounting according to the principles of equity for both charges and credits upon each cotenant’s interest”].)

Along those lines, if the court determines that the parties to a partition intended a tenancy in common, then the court may order reimbursement in proportion to the amounts contributed to the purchase price. (Milian v. De Leon (1986) 181 Cal.App.3d 1185, 1196.)

Donnelly v. Wetzel (1918) 37 Cal.App.741 is an old case, but an apt illustration of how this concept plays out in a partition action. Ms. Minnie Donnelly purchased a property with a married couple, the Wetzels, and they took title to the property as tenants in common. Donnelly owned a 1/3 interest, while the Wetzels owned 2/3. After a few years, the Wetzels conveyed their 2/3 interest to a third party called Honey. Donnelly later brought a partition action to have the property sold. The court ordered the property sold, and the proceeds divided so that one-third went to Donnelly and two-thirds went to Honey.

What is similar between a joint tenancy and a tenancy-in-common?

In California, these forms of ownership are similar in many respects. (see Zanelli v. McGrath (2008) 116 Cal.App.4th 615, 630 [“the rights of tenants in common and joint tenants with respect to property are the same”].)

The same is true of liens and encumbrances. (Grothe v. Cortlandt Corp., 11 Cal.App.4th 1313, 1318.) “A joint tenant may, during his lifetime, grant certain rights in the joint property without severing the tenancy. But when such tenant dies, his interest dies with him, and any encumbrances placed by him on the property becomes unenforceable against the surviving joint tenant.” (Id.)

There are, however, key differences between these forms of ownership that can affect a co-tenant’s rights to commonly-owned real estate.

Undoubtedly, the defining characteristic of a joint tenancy is the right of survivorship. As the name implies, this right arises “only upon success in the ultimate gamble – survival.” (Estate of Propst (1990) 50 Cal.3d 448, 458-459.) This means that “when one joint tenant dies, the entire estate belongs automatically to the surviving joint tenant(s).” (Grothe v. Cortland Corp. (1992) 11 Cal.App.4th 1313, 1317.) “Nothing ‘passes’ from the deceased joint tenant to the survivor; rather, the survivor takes from the instrument by which the joint tenancy was created.” (Ibid.)

Thus, whether real estate is held as a joint tenancy is extremely significant when held with a non-family member, or someone who a party does not want to inherit the property after their passing.

Death and Tenancy in Common

Alternatively, there is no right of survivorship with tenancies in common. (Estate of Propst, 50 Cal.3d 448, 458-459.) Thus, “upon the death of a tenant in common, the deceased tenant’s interest in the common property is subject to disposition by will or trust, in the same manner as other property.” (1 John A. Hartog & Albert G. Handleman, California Wills and Trusts, § 3.06.)

This means that title to the deceased joint tenant’s property passes on their death to the person to whom it is devised in their last will, or, in the absence of such a devise, to the decedent’s heirs as prescribed in the laws governing intestate succession. (California Probate Code, §7000.)

How can the attorneys at Underwood Law Firm assist you?

In California, how title is held to property can make a substantial difference in a party’s rights to real estate. As these differences may affect your legal rights, you should consider consulting an experienced attorney if you are concerned about your rights. Whenever you have questions about rights to real estate in a difficult co-tenancy, the attorneys at Underwood Law Firm are here to help.