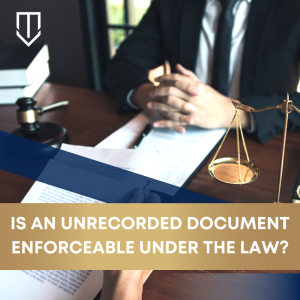 Sometimes, two or more persons claim to have an interest in the same piece of property. If these interests conflict, then the courts have to step in to adjudicate the dispute and decide whose title is true. But things can get messy when both parties appear to have valid deeds, free or forgery, or other impropriety.

It is for this reason that California (and most other states) enacted laws called “race-notice” statutes. As will be discussed below, these statutes are designed to give “priority” to competing property interests, making it much easier to settle disputes over the same piece of land.

Of course, there are many exceptions to the general rule that the first to record their interest gets the highest priority. Bona fide purchasers, for instance, are entitled to special benefits if they lack knowledge of competing claims. Underwood Law firm is more than familiar with real estate recording laws and has the experience and knowledge to assist you in these types of title disputes.

What documents can be “recorded?”

This broad description is mirrored in the Civil Code, where the term “conveyance” “embraces every instrument in writing by which any estate or interest in real property is created, aliened, mortgaged, or encumbered, or by which the title to any real property may be affected, except wills.” (Civ. Code § 1215.)

What effect does “recording” have on the priority of property interests?

Usually, if a person purchases or acquires an interest in a property, they will “record” that interest. When a document is recorded (typically by a notary), it is filed with the county and becomes a public record. Anytime a title search is conducted by a title insurance company or a bank, then that recorded instrument will appear during the search.

This process is incredibly important for property transfers. This is because California follows the “first in time, first in right” system of priorities, under which “a conveyance recorded first generally has priority over any later-recorded conveyance.” (First Bank v. East West Bank (2011) 199 Cal.App.4th 1309, 1313.)

The justification for such a rule is that a recorded interest constitutes “notice” to all other persons who may claim to have an interest in the same property. As stated in the Civil Code, “every conveyance of real property or an estate for years… recorded as prescribed by law from the time it is filed… is constructive notice of the contents thereof to subsequent purchasers and mortgagees.” (Civ. Code § 1213.)

Thus, a subsequent purchaser cannot claim to be ignorant of a prior recorded interest because the recording is a public record and would show up during a title search.

Is an unrecorded document enforceable under the law?

Yes. But it is not encouraged. In California, an unrecorded interest is valid between the parties thereto and those who have notice thereof. (Civ. Code § 1217.) The statute’s wording makes clear that while unrecorded interests may carry water in a court, they may only do so when other persons are on notice that this interest exists.

For example, “Shawn” and “Julie” are romantic partners who decide to purchase a home together. They buy a property in Northern California and decided to split the ownership 50/50. They take title to the house as “joint tenants,” a decision which carries a number of legal consequences. During the course of their relationship, they have a child, “Jack.”

Years later, Julie decides to gift her share of the house to Jack before she and Shawn inevitably part ways. By law, this transfer terminates the joint tenancy she has with Shawn and turns it into a tenancy in common. After receiving this generous gift from his mother, Jack forgets to record the deed.

After the couple splits, Shawn decides to partition the property and files a lawsuit. He knows that Jack owns the other half but names Julie in his lawsuit anyway, asserting that they still have a joint tenancy. Ultimately, the court disagrees with Shawn. Even though Julie’s deed to Jack was unrecorded, it is still enforceable because Shawn knew it existed.

While a deed may not need to be recorded, the importance of doing so cannot be understated. This is because the law gives special treatment to a class of individuals called “bona fide purchasers.” In short, these people are those who acquire a property interest with no knowledge or notice that a prior claim exists on the property. Indeed, unrecorded conveyances are flat-out void as to subsequent bona fide purchasers. (Civ. Code § 1214.)

This is why it is wise to record those instruments which affect the property. Failure to do could render them entirely void as to a person who subsequently acquires a property interest without their knowledge.

How does one become a bona fide purchaser?

Not everyone who purchases property is automatically a bona fide purchaser. To be considered a bona fide purchaser, there must be payment of value in good faith and without actual or constructive notice of another’s rights. (Gates Rubber Co. v. Ulman (1989) 214 Cal.App.3d 356, 364.)

In other words, a bona fide purchaser needs to give adequate consideration and must not have knowledge of another claim affecting the property.

Consideration is a legal term of art, but its essence is that it constitutes what is bargained for between the parties to a transaction. For example, when buying a home, the consideration is usually the purchase price exchanged between the buyer and seller.

In the context of bona fide purchasers, the buyer needs only part with something of value in exchange for the property. (See Horton v. Kyburz (1959) 53 Cal.2d 59, 65.)

The second element required to establish BFP status is that the buyer has neither knowledge nor notice of the competing claim. “A person generally has ‘notice’ of a particular fact if that person has knowledge of circumstances which, upon reasonable inquiry, would lead to that particular fact.” (First Fidelity Thrift & Loan Assn. v. Alliance Bank (1998) 60 Cal.App.4th 1433, 1443.)

In order to show that one is a bona fide purchaser, an individual needs to prove that a reasonable inquiry was made into competing claims with the property. Usually, this requirement is established if someone hires a title company to conduct an official title search.

Few things can be more stressful to a property owner than the assertion of an unknown ownership claim. Months, if not years, of hard work finding the perfect property can be quashed in an instant. In these situations, finding the right real estate attorney makes all the difference.

As each case is unique, property owners would be well-served to seek experienced counsel familiar with recording laws and title disputes. At Underwood Law, our knowledgeable attorneys are here to help. If you are concerned about whether you qualify as a bona fide purchaser, whether an unrecorded agreement is enforceable, or if you just have questions, please do not hesitate to contact our office.

Go here to get more details.