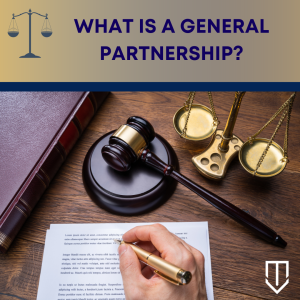 What is a General Partnership?

How is a General Partnership Created?

For example, “Bob” and “Jill” made an agreement to work together to conduct a laundromat business and share the profits of the business. During the business, Jill was given the authority to negotiate a contract with the “Supplier.” Jill then entered into a contract with the Supplier. Here, Jill and Bob created a general partnership, meaning that Bob and Jill are both jointly and severally liable for the obligations of the partnership. Although Jill was the one who entered into the contract with the Supplier, Bob is still liable under the contract because he is a general partner that is liable for the obligations of the laundromat business.

What is a Limited Partnership?

How Do You Create a Limited Partnership?

For example, “Bob” and “Jill” agree to work together to start a swimsuit business. They agreed that Bill would run the entire business and Jill would contribute some of her money to the business, but that they would share the profits of the business. In fact, Jill was barely involved in the management of the swimsuit business. After some time, a Supplier initiates a lawsuit against Bob and Jill’s swimsuit business under a contract that was entered into by Bob. If Jill argues that she could not be held liable for the contract because her little involvement in the business made her a limited partner, this argument will not work. Bob and Jill made an agreement to associate together to carry on the swimsuit business. They never filed a Certificate of Limited Partnership with the Secretary of the State, and therefore a general partnership was created, not a limited partnership. Therefore, Jill is a general partner, and she would be held liable under the contract.

Partnerships are already fairly common in California. But the commonalities of partnerships formed without significantly advanced thought mean that they frequently lead to complicated liability questions. A partnership can be very difficult and require substantial time, money, and legal effort to unwind, they should be formed only after a deliberate and thoughtful approach.

As each case is unique, business owners would be well-served to seek experienced counsel familiar with the ins and outs of partnerships. At Underwood Law, our knowledgeable attorneys are here to help. If you are concerned about a partnership dispute, please do not hesitate to contact our office.