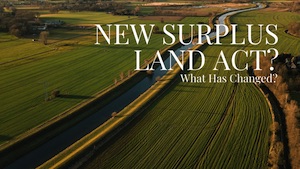 Similarly, local agencies may declare land to be deemed “surplus” on an annual basis as part of their planning process. (Gov. Code § 54221(b)(1).) As previously discussed, some of the biggest changes to the Surplus Land Act are those found in the definitions and the property to which the Surplus Land Act applies.

By changing these definitions, and making the designations of such land more frequent, AB 1486 makes it more likely that surplus land will actually be recognized as such and made available for transfer and development.

Removal of Priority; Maintenance of Preferences

Another powerful change is that the new Surplus Land Act removes the requirement that a local agency gives priority to the development of affordable housing for lower-income households when disposing of surplus land. Previously, that priority limited the competition for purchase of the land. While AB 1486 does not completely remove all preferences for disposal of surplus land for affordable housing, it does allow certain developers to become more competitive when purchasing such property.

Finally, AB 1486 imposes a substantial penalty—30% of the final sale price of the land—on any public agency that disposes of land in violation of the new law. (see Gov. Code § 54230.5.) While there is a safe harbor provision that is available when the Department provides notice to the local agency, and provides for 60 days to cure any potential violation, such a steep penalty is likely to be a serious deterrent and ensure almost uniform compliance. Moreover, the new Surplus Land Act authorizes private lawsuits against a public agency to enforce the law’s provisions.

Collectively, these new changes to the Surplus Land Act, among others, will facilitate the process of disposing of surplus land and make it more likely that such land is actually ultimately transferred and put to use. Ultimately, those persons interested in the development of surplus land will benefit themselves by understanding these processes to make sure that they can make the most of the new change in law.

If you are contemplating the purchase of surplus land and would like assistance navigating the process, please contact Marcus | Underwood for a free initial consultation.